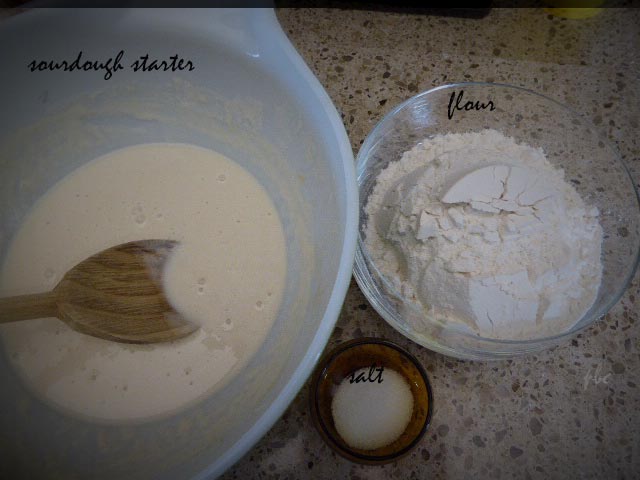 The morning after I posted, Sourdough Made Simpler, I began thinking about a statement I’d made. I’d written that the bread recipe I’d used could be prepared by hand, without the use of a food processor, or bread maker. I’ve made bread often enough in the past to know that the recipe could be made this way. Or could it? I decided to give it a try. The original recipe also used a method of adding yeast to the flour and water that I had never tried, and didn’t trust. This time I would try their method. So even before I made breakfast, I prepared the sourdough starter as described in the recipe. It was a success and produced a very active batter. I covered it loosely with plastic wrap and set it aside in a protected area for two days.

Today,  I took the above photo as I prepared to make the bread, doing all of the preparation by hand. I will repeat the Weight Watchers® recipe for those who would like to give it a try, the Old Fashioned Way. No machines!

To prepare the starter, combine the flour and water in a non metal bowl, stir gently with a wooden spoon. Remember no metal near the starter. Next sprinkle the yeast on top of the mixture, folding it in gently. Cover the bowl loosely with plastic wrap and set the starter aside for two days.

Combine the flour, salt, and starter in a non metal bowl. Mix with a wooden spoon until the mixture forms a soft ball. Place the dough on a hard surface that has been dusted with flour. Knead by hand until the dough is smooth and no longer sticky. Lightly oil the sides of a large bowl and place kneaded dough in bowl. Cover loosely with plastic wrap and place in a warm place to let dough rise. It should double in volume. This will take approximately an hour. When ready, punch down the dough. Sprinkle more flour on the hard surface and shape into a a 6 inch round loaf. Lightly oil a baking sheet and place loaf on the sheet, then cover loosely with plastic wrap and place in a warm area until doubled in volume. About an hour.

Preheat the oven to 400° F; place a pan of boiling water on the lowest oven rack. Dust the loaf with about 1 tsp of flour, then with a sharp knife slit the top of loaf twice to make a cross pattern. Bake about 20 minutes: reduce oven temperature to 350° F. Bake until the bread is well browned and sounds hollow when tapped. 20-30 minutes longer. Remove the loaf when ready, and cool completely on a rack.

I was very pleased with the result. My husband and I both agreed that this loaf was even tastier than the last. Looks like the old Fashioned method wins.